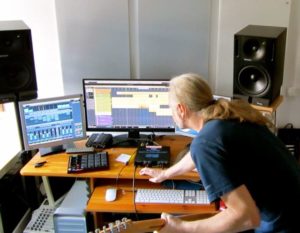 Uwe Cremer (born 1965) grows up in a time of musical changes. When he hears „Kometenmelodie II“ and „Autobahn“ on the radio in 1974, this is the beginning of his continuing love for Krautrock. „Kraftwerk’s „Menschmaschine“ becomes the first LP in his constantly growing record collection. Eloy, Alan Parsons Project, Camel, Pink Floyd, Klaus Schulze, Tangerine Dream, Scorpions, Jane, Grobschnitt follow. Punk and New Wave, Postpunk, Gothic, Neue Deutsche Welle and the New Wave of British Heavy Metal are further influences.

At the age of thirteen, Cremer buys his first acoustic guitar, teaches himself how to play and jams regularly with friends. In the early 90s he plays in a band for a short while and starts writing his first songs. He experiments with sounds from his old Commodore C64, gets a keyboard, records his musical ideas on the computer and becomes a solo artist. In the following years, three private releases are produced under the pseudonym PSR.

Since 2006 Cremer has been publishing his music under the name Level π. His debut album Entrance was released by „Garden of Delights“, Electronic Sheep by „Dreaming“, a sublabel of „Musea Records“. With his third album Dunkelstunde he takes the distribution into his own hands, and his fourth album this burning part of me is distributed by „Reptile Music“. In 2020 Cremer teams up with Timezone Records and releases Elektronische Philosophie.

Cremer also works with various musicians: Thomas Rydell, a composer for film and television from Sweden, Dave Pearson aka Computerchemist, who lives in Hungary, and Andreas Baaden from Aegidienberg near Bonn. Cremer is represented with single tracks on compilations and as a guest musician on the CDs of various artists.